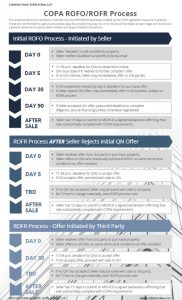 Owners of multifamily residential properties in San Francisco will soon have to extend purchase offers to certain nonprofit organizations, before making or soliciting offers to sell those properties to anyone else—and will have to give those nonprofits the right to match any offer received from a potential buyer—under new legislation that is poised to become effective in June 2019.

In the meantime, potential buyers and sellers of multifamily properties should familiarize themselves with COPA’s key provisions, which we covered here, and the applicable timelines, which we’ve illustrated in the downloadable graphic here.

As we explained in a prior post, San Francisco Supervisor Sandra Fewer introduced the Community Opportunity to Purchase Act (COPA) which would give “Qualified Nonprofits,” vetted by the City, both a right of first offer (ROFO) and right of first refusal (ROFR) over multifamily properties.  This applies to buildings (existing or under construction) of three or more units, as well as privately owned vacant lots where three or more units could be constructed.  On April 23, the Board of Supervisors unanimously approved the legislation, which the Mayor signed on May 3, the last possible day.

After the effective date of June 2, the Mayor’s Office of Housing and Community Development (MOHCD) will have 90 days to promulgate rules to implement COPA.  MOHCD must also screen potential Qualified Nonprofits—generally, established organizations that have demonstrated a commitment to and experience in providing housing to lower-income City residents—and following certification, must publish a list of Qualified Nonprofits on its website.  The legislation doesn’t give MOHCD a specific deadline to publish an initial list, which will presumably trigger the requirements for sellers to comply with the ROFO/ROFR process.

Although COPA has been hailed by various low-income housing organizations, the San Francisco Apartment Association has stated in public comments that it believes the legislation is “illegal and unconstitutional,” and has indicated it may bring litigation against the City.  We will be monitoring any legal developments surrounding the legislation.

What does COPA mean for multifamily transactions?

For multifamily properties that are already in contract to be sold as of COPA’s effective date, the legislation “shall not be construed to impair” any such contract, or to affect property interests held by anyone other than the seller (including existing security interests, options to purchase, or rights of first offer or refusal).  However, for buyers and sellers that have engaged in preliminary negotiations but have not entered a formal purchase and sale agreement as of the effective date, these protections may not apply.

COPA appears likely to affect a broad range of transactions in San Francisco, including not just asset sales but also certain corporate transactions and transfers in interests held by trusts.  (The Budget and Legislative Analyst’s report to the Board of Supervisors estimated that approximately 112 transactions valued over $5 million may have qualified under the terms of COPA in 2018, although it is unclear how closely this figure lines up with the range of transactions contemplated by the legislation).  In very general terms, the most likely immediate effects for sellers of covered properties may be transactional delays, and associated costs, especially as parties adjust to compliance with the new regime.  Additionally, sellers may face new liabilities, as COPA confers new private enforcement rights on Qualified Nonprofits and subjects sellers (and parties that have “colluded” with sellers) to monetary damages, possible civil penalties, and attorneys’ fees.

COPA raises a number of significant questions (e.g., what exactly constitutes an “offer,” what is the standard for expressing a “desire to accept,” and in the context of a third-party offer, how to interpret whether it is on “materially different” terms than were offered to Qualified Nonprofits), some of which could be addressed in the MOHCD regulations.  The Washington D.C. programs on which COPA has been loosely modeled (the Tenant Opportunity to Purchase Act and District Opportunity to Purchase Act, or TOPA and DOPA respectively) have been the subject of numerous lawsuits and controversy since enactment in 1980.  San Francisco’s new legislation may prove to be similarly fraught, and it will be crucial for sellers and buyers to carefully consider the legal aspects of their proposed multifamily transactions as COPA begins to take shape.