Board of Supervisors to Consider Compromise Inclusionary Housing Legislation 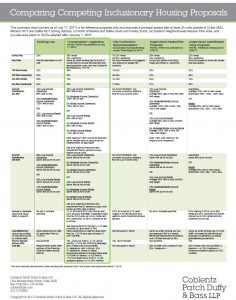 The Land Use and Transportation Committee of the Board of Supervisors is now scheduled to consider compromise inclusionary housing legislation on June 12th, following a continuance at the Committee’s June 5th hearing. As shown in our summary comparison chart, the legislation would generally retain existing grandfathering protections as to the total percentage of affordable units for certain pipeline projects, but would make many other major changes to the City’s existing program.

The most significant change would be to the required percentage of on-site affordable units for large projects (25 or more units).  The proposed percentages are 18% for rental projects and 20% for ownership projects, as compared to 25% under existing law.  The legislation would also adjust income level restrictions for affordable units.  In large rental projects, affordable on-site units would need to be provided as follows:  10% low income (affordable to households earning 55% of Area Median Income (“AMI”) or less); 4% moderate income (affordable to households earning 80% of AMI or less); and 4% middle income (affordable to households earning 110% of AMI or less).  A similar affordability breakdown would be set for on-site large ownership projects, but with higher permitted AMI levels.  Overall, the legislation marks a partial shift toward providing workforce housing under the City’s inclusionary housing program.  The overall affordable percentages for large projects would increase by 1% annually for two years (low income), and then by 0.5% annually (moderate/middle income), until affordable percentages reach 26% for ownership projects and 24% for rental projects.

The City would also impose an affordable housing fee on any additional units obtained by a project sponsor through compliance with the State Density Bonus law, unless an Environmental Evaluation (“EE”) application was filed for the project by January 1, 2016.

For project sponsors choosing either the in-lieu fee or off-site options for large projects, the affordability requirement would be 30% for rental projects and 33% for ownership projects, creating a new distinction between rental and ownership projects.

The legislation would also apply a new, City-wide unit mix requirement to all projects containing 10 or more units, not just to the inclusionary affordable units within those projects.  It mandates that at least 25% of the total units include two or more bedrooms, and at least 10% include three or more bedrooms.  The unit mix requirement would not apply to projects with an EE on file by January 12, 2016, HOME SF projects providing 30% of on-site units as affordable, projects within areas or Special Use Districts imposing a stricter unit mix requirement, or certain specified housing types (e.g., SRO units, student housing and senior housing).  Project sponsors could seek waivers or modifications of the unit mix requirement through the Conditional Use process or, where applicable, the Section 329 Large Project Authorization process.