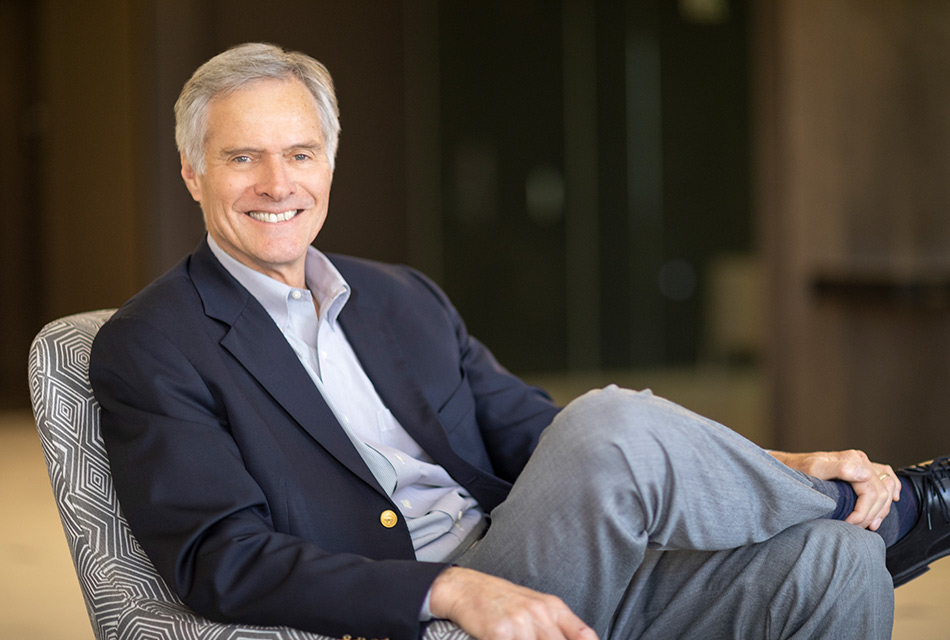 St. Thomas More Society president Matthew Graham notes Steve “has contributed to the community so selflessly and with such great humor over the years, especially in the area of Catholic education.” Steve has been chairman of San Francisco’s Immaculate Conception Academy’s board of directors for 10 years, and was instrumental in the school’s transition to a Cristo Rey school and recently honored with ICA’s Cristo Rey Leadership Award. ICA president, Dominican Sister Diane Aruda, notes of Steve, “At the heart of his service is building community through relational leadership. We are both proud of Stephen and grateful for him.”

At the October 25th award ceremony, the following tribute was read:

“A native son of San Francisco, Stephen T. Lanctot grew up in the Haight Ashbury neighborhood where he attended nearby St. Agnes grammar school and St. Ignatius College Preparatory. He left the City to attend Santa Clara University, where he received a degree in history in 1973. After working in the maritime industry, he returned to the Hilltop where he attended the University of San Francisco School of Law while continuing to work full-time throughout his law school studies.

Steve graduated with a law degree from USF in 1978 and began his legal career as Associate Division Counsel for Sea-Land Service before moving to law firm practice at Tobin & Tobin. In 1983, he joined the firm now known as Coblentz Patch Duffy & Bass, where for over 30 years he has practiced labor and employment law with creativity, humility and good humor.

A long-time parishioner of St. Philip Neri in Alameda, Steve has been a dedicated servant of the community, and particularly Catholic institutions, throughout his life. He has served as a member of the St. Philip Neri School Board, the Board of Governors of USF School of Law, the USF Alumni Board, the St. Mary’s Cathedral Board, the Board of Directors of the National Brain Tumor Society, the American Auxiliary of the Paris Foreign Missions, and the Guardsmen Board of Directors.

Steve is especially devoted to Catholic education, particularly to programs that foster Catholic education for the urban poor and underserved. Perhaps most significantly, Steve was instrumental in helping to save San Francisco’s Immaculate Conception Academy, which for over 130 year has served underprivileged young women and their families in San Francisco. During a time in which many of the City’s girls’ high schools were closing, for 10 years he worked tirelessly as the Chairman of ICA’s Board of Directors and led the school in its successful transition to a Cristo Rey school, a model that provides needy students with professional workplace skills as well as an excellent and affordable education. For his dedication and service to the school, Steve was honored with ICA’s Cristo Rey Leadership Award. He is now supporting the exploration of a Cristo Rey school to serve the residents of Oakland and the East Bay.

Steve and his wife, Mary, an educator, are proud parents of three adult children, Brendan, Madelyn, and Caitlin, and devoted grandparents to Maddock and Beatriz.

With a ready smile, Steve exemplifies St. Thomas More’s qualities of generosity, humility, faithfulness, and joy. In recognition of a lifetime of service to the church and to those in need, the St. Thomas More Society of San Francisco proudly and with great appreciation recognizes Stephen T. Lanctot with the 2016 St. Thomas More Award.”